Skip to content
This weekend, I held an event at my house re-creating a minor Battletech historical battle (the Battle at Kansas Plateau on Arboris V on December 17, 3028 during the 4th Succession War for those interested in the gory details). These special events are something I do with some regularity (they used to be more frequent when I was coordinating events for a game store), so I thought there might be some interest in the basic approach I use in building and running these events.
The first step I take is to make sure there’s actually an audience for what I want to do. This seems obvbious, but you’d be 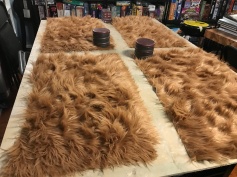 surprised how many people set up an event and just assume their friends and players will show up. For my in-house events, I have a small Facebook group where I actively poll to see what people are interested in. That doesn’t mean they’ll attend, it just means that they have interest in the event. This way I get an idea of the overall excitement level for the event (and I also use it to prioritize events).
Next, I sketch out the entire event. If it’s a minis event, this is looking for rules, terrain and map designs. For an RPG, it’s fleshing out the adventure outline and making a list of extra materials (minis, maps, props, etc). For card games, it’s play mats and deck lists. Regardless of the type of event, I always invest some time in finding or building solid player aids. For most events, there will be some players (usually most) who don’t know the rules to the game being played. While you’re going to give an overview before you start and possibly pre-publish any needed rules, I’ve found that player aids save a ton of time in terms of questions and issue resolution.
After all of this, I start prepping the actual event itself. For this most recent event, that meant building a new board, building large fields of mutant wheat, building some basic terrain and building opposing forces of mechs. One of the tricks that I use to keep people interested in the event is to post “in progress” pictures as I go. This goes a long way towards keeping people engaged (and helps to keep you motivated through the actual build!).
From there, you just need people to show up! I tend to do a follow-up a week before the event to make sure people have kept it on their radar. This is the same basic process I used when organizing mini-cons (which would run for two days), though I tend to involve more tooling for these larger events (spreadsheets to keep everyone on the same page with regards to space and scheduling). I’ll write more about the event itself at a later date (I’ve had some requests to run it again, so I may wait until that’s happened).